I love all of the visits to my blog!  As you all know, I interview authors here on S. M. Nystoriak’s Writer’s Block.  The biggest reason I began this endeavor was because I admire writers.  I love the process of writing, I love to meet people, and I get immense energy learning about how other writers tackle their craft.  Recently, however, I thought about some of the writers that influenced me through the years, thanks to a fellow blogger and recent interviewee, Scott Southard.  I discovered that I am a fan of the classics.  What would I do if I could interview those authors here on my Writer’s Block?  Bill and Ted’s Excellent Adventure, anyone?

So, I thought it might be fun to prep some interview questions with those authors whose work meant a lot to me through my life.

I always strayed away from fiction in school.  I really enjoyed learning about things, but from a research standpoint.  But, when I got into high school, and my 9th grade teacher passed around her copies of The Rime of the Ancient Mariner, I became engrossed.  Originally published in 1798, the overall tone of that poem spoke to me in a tremendous way.  Its messages about living life and accepting blessings, even when they appear to be anything but, still ring to me.  I came away from that work of art with an appreciation for the written word as I had never experienced before.  There is a Wiki article about the poem, here:  http://en.wikipedia.org/wiki/The_Rime_of_the_Ancient_Mariner 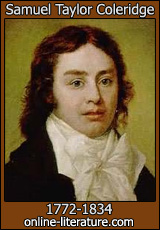 So, for my first interview with the past, I choose Samuel Taylor Coleridge, the author of the classic epic poem, The Rime of The Ancient Mariner.  Here goes…

Q:  I always imagined that the plotline for The Rime of the Ancient Mariner was written as if it actually happened to someone, or possibly even a dream.  Tell me.  How did the idea for this tale come to you?

Q:  This poem has some incredibly dark parts, when the albatross is dead and death seems to come at the ship form all sides, for example.  It is quite visual.  How did you come to conjure those creepy images?

Q:  Speaking of visual, are you an artist with paint or pencils?  The way that your words depict the boat, the sea, death, the Ancient Mariner himself, makes me wonder if you are also an artist.

Q:  So many of the lines from the Rime have become saying of modern day.  Could you have even imagined that would be the case back when you wrote it?

Q:  And musicians have done covers of this magnificent work.  In the 1980’s, the metal group Iron Maiden wrote music for it, and performed it with the complete text.  What do you think of that?

Q:  And about the rhyming lines.  Did you originally set out to write this work as a poem?  Or, did the words just present themselves that way?  As a musician, I have always had a fondness for the rhythm of the work.

If anyone is curious about the Rime of the Ancient Mariner, and would like to read it, here is a link:  http://www.online-literature.com/coleridge/646/  I hope you enjoy it.

For those of you who know this work already, chime in.  What did you love about the Rime?  What would you want to know from the author?  Has anyone seen a telephone booth-time machine lately?