An old classic never dies.  My Nana used to say that often.  She of course was referring to clothing and accessories.  Nana has passed away now, but her mantra about the classics has stuck with me.  But in this instance, I refer to literature, specifically, the epic poem, The Rime Of The Ancient Mariner by Samuel Taylor Coleridge.

In 9th grade, I was introduced to this poem by my English teacher.  Almost immediately I was taken by the language of the work.  That is another topic but suffice it to say, I have always been  interested in many forms of language and communication.  From a musician’s standpoint, the rhythm of Coleridge’s words makes beautiful music.  My English teacher spent a really long time with us on the poem, as she made us practice the pacing and accent of each syllable in each stanza.  Because of that, I really got to know, on a very deep level, the meaning of the Rime.

On the surface, its message is to love all things great and small, but to me, the poem meant something more.  It was a reminder to strive to be the best person I could be, to share what I have learned with others, and as we are faced with challenges in life, to have faith, and continue to do good work. 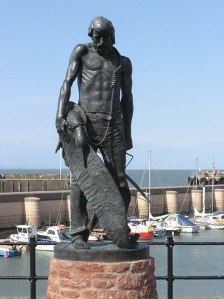 1 Statue of The Ancient Mariner in Watchet, Northern England

All these decades later, I still think about this poem.  In the years following 9th grade, I would re-read the poem annually, finding peace and grounding within its lines.  I was convinced the I really “got” the poem’s meaning.

One day, recently, it occurred to me that perhaps the message might vary from reader to reader.  It wouldn’t be unheard of to have differing viewpoints on the same piece of work.  As two musicians perform the same piece of music, their own take on it comes through.  A person’s perspective is the ultimate variable.  Every reader could arrive at their own conclusion.

Which brings me to today.  I have begun the preliminary research into a new novel, tracing the voyage of the Ancient Mariner of the poem, beginning in England.  Who knows.  Maybe retracing his fictional steps might shed some more light into my own perceptions of the Rime’s meaning.  It has been an interesting experience so far, as I delve into the small towns of the English coast during the time of the Mayflower.

2:  A possible sailing route of the Mariner

There are people who have speculated the course that the Mariner’s ship may have taken, from Old England down through the Atlantic toward Antarctica.  Obviously, we will never know.  The Rime is a work of fiction.  However, his voyage was perilous and life changing.  When he lands back home, he is filled with a renewed light and sense of purpose as he stops a Wedding Guest to tell his tale to.

As I look forward to looking back into the history surrounding The Rime Of The Ancient Mariner, I embrace its messages with renewed eyes.  And as my new novel unfolds, I hope to know this work on an even deeper level through the eyes of my characters.  For me, this old classic will never die.