I don’t often get watch television programming that is current, meaning, I watch shows after the fact, via Netflix or Amazon Prime.  I am sure many of you all are the same.  But this past week, I heard, from across the house in the living room, the following hauntingly familiar melody:

It’s FANTASTIC how a single line of music notes can bring back a flood of memories and feelings.  The tones of this melody sent a familiar chill up my arms.  I thought for a brief moment that my daughter had put in a DVD, and the preview for one of the Harry Potter films was on it.  After all, she would not be watching a Harry Potter movie, simply because they had never been her thing.  But I think that magical day is finally coming…more on that in a bit!

But it wasn’t a preview.  When I walked in to the living room to see what was going on (because, you know, Harry Potter always makes me look…), things got even more FANTASTIC!

She was watching television…actual current programming. And the music I heard was from the end of the trailer for the latest film about the Wizarding World:  Fantastic Beasts And Where To Find Them!  (Cue the trumpets).  It’s really happening!

I wrote about what J.K. Rowling’s magnificent series has meant to me through the years in a blog post last Spring.  But now, this new film is set to be launched mid November, and I simply cannot wait.

In case you haven’t seen it yet, here is one of the trailers:

The memories, the feels, the awesomeness that Rowling created has returned, and I can’t wait to see how this American Wizarding World plays out.  The original series occurred during a part of my life when my son was the perfect age and mindset.  It was something we shared together, as a family.  My daughter is eight years younger than my son, and never got into it, though.

Until now!  This is the most FANTASTIC part of all!  That preview sparked a real interest in her.  At a rating of PG-13 (Fantasy Violence being cited), I don’t know if Fantastic Beasts will be appropriate for her or not.  But in any case, I am thrilled that I will get to relive Rowling’s world with my daughter.  It is a very special thing.

Who else is excited about this?  Let me know in the comments!

None of what you read here today is new information.  But I had a beautiful moment this past week, and I would like to share it with you.

Many of you know that I am a Middle School music teacher as well as an author.  One of the things I enjoy most about being a music teacher is that I can have meaningful discussions with my students about the music that accompanies films.  And when those films are based on literary works, well, I just love that part of my job even more.  Our most recent discussion:  The music from the Harry Potter movies.

This discussion afforded me the opportunity to revisit those wonderful stories by J.K. Rowling, bringing back memories of my son, aged five at the time, being handed a set of the books by my grandmother.  All of the books hadn’t been written yet, but we had perhaps the first five books in the collection.  I began reading them to my son, with the plan of seeing the first movie together at the theater.

I had almost forgotten the impact of those stories on our family.  The way J.K. Rowling weaves the tale so completely, creating a multi-faceted, multi-layered world that so many of us wished was real.  Her characters became household names which we felt a full range of emotions for, from love, to empathy, to fear, to sheer hatred.  Rowling’s world of Harry Potter became an extension of our own, a fantasy we got to live out with her, if only for a short while.

The books that my grandmother had gifted to my son came at a perfect time.  Reading them and watching the films spanned a decade our lives.  The highs, the lows, the miracles, the magic.  We didn’t know it, but we needed it, and when we discovered it, we ran with it.

I waited in line for Deathly Hallows, which arrived in our local Border’s when my son was nine and my daughter was seven-months old.

But this week it hit me:  It isn’t over. 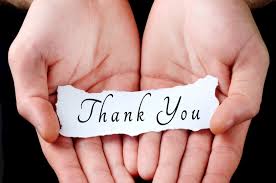 To be able to revisit these old friends is a gift that storyteller’s give to their readers.  I thank J.K. Rowling for being that storyteller for my family.  The Harry Potter series became a part of the lives of so many kids, of which my son was one.  Because he was the age he was when we began the journey of Harry Potter together, he got to grow alongside Harry, Ron, and Hermione, as they grew up in Hogwarts.

And I got to go through it with him.  Another gift to be thankful for.

Thank you, J.K. Rowling, for your wondrous gift to my family and the world.