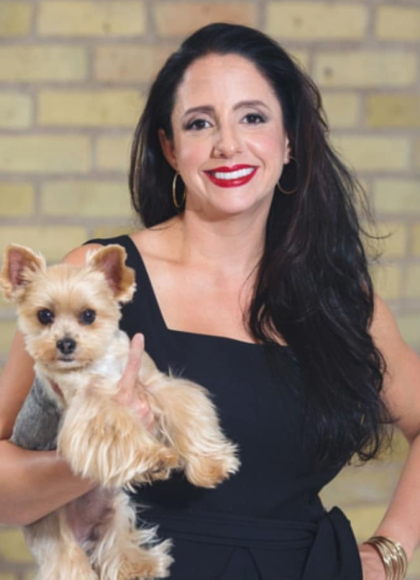 Last week, I featured author Jenn McKinlay, and her book, Paris Is Always A Good Idea. The post can be found here.

Today’s Summer Fave is by New York Times bestselling author, Abby Jimenez, whose RomCom, Part Of Your World, has stolen my heart! 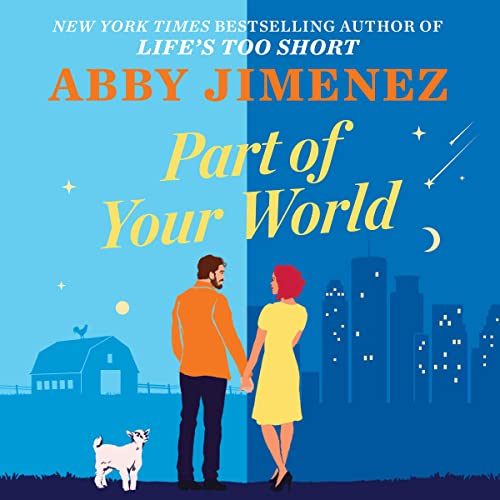 This book features two characters, Alexis and Daniel, and their worlds couldn’t be more different.  “Big City” Alexis comes from money…LOTS of money. She is a physician among physicians in her family, and reluctant heir to the head of the Hospital Board; a familial career path which dates back generations.

Daniel is the Mayor of Wakan, MN, a seasonal, small, one-horse town, where he is a jack of all trades, artisan carpenter, bed and breakfast owner, and baby goat fosterer. He and his country cousins are a big part of each other’s lives, in the most close-knit and charming way.

When Alexis’ car breaks down in Wakan, Daniel rescues her. Of course, there is lots of chemistry early on, but how can they make it work when they are from completely different worlds?

I adore this book. I feel so much for Alexis and Daniel. Scratch that…I LOVE THEM! And if you fancy yourself a read that will take you through a “colliding worlds” type of romance, with all the charm of a small town and baby goats in pajamas, this book is for you.  Additionally, Abby has created wonderfully fleshed out side characters and subplots that will bring on all the feels.

Alright.  Let’s commence with the interview! 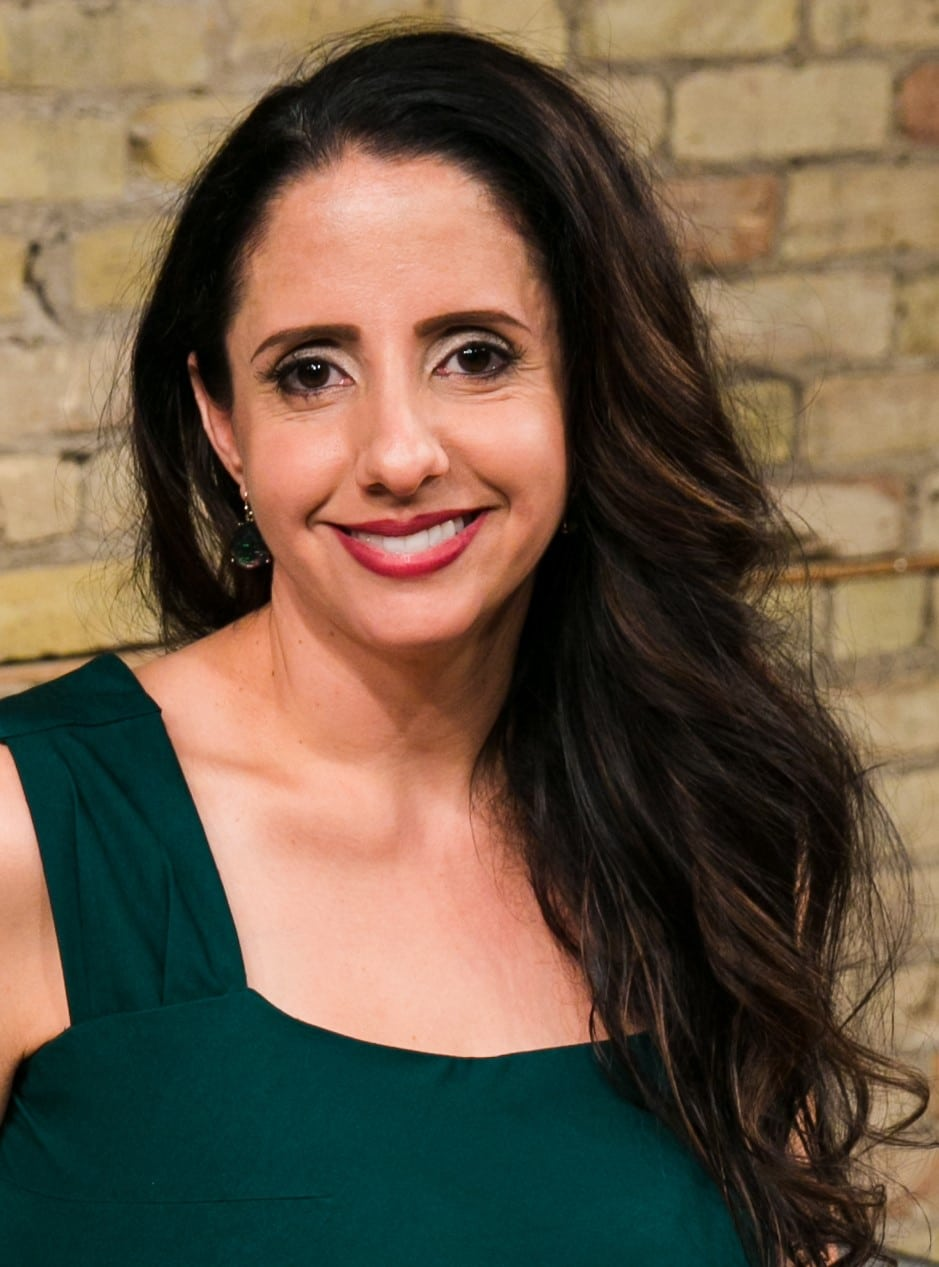 Writer’s Block: Would you mind telling my readers a little bit about yourself? Can you describe your background, and how it has brought you to become an author?

Abby Jimenez: My background has nothing to do with writing, interestingly enough. I took a few creative writing classes in high school, but went straight into the workforce when I graduated and never even went to college. In 2007 I lost my job and founded a cake business out of my house. I ended up opening a retail bakery in 2009. I went on TLCs show Fabulous Cakes for two seasons, then I got an invite from Food Network and won Cupcake Wars. In 2011 I moved to Minnesota and opened up two more locations, one in Minneapolis and one in St. Paul. It wasn’t until 2017 that the bakeries were stable and staffed well enough for me to take a step back and start writing. I started writing as a hobby and it turns out I was somewhat good at it. I spent a year on Critique Circle honing my craft and I came out of it with The Happy Ever After Playlist. I got an agent with that book and while we were in submissions I decided to write the prequel, The Friend Zone. The rest is history!

Writer’s Block: I have read two of your books, The Happy Ever After Playlist, and Part Of Your World…Both fantastic! For this post, I will focus on Part Of Your World, since it’s your latest release, but after reading both, I noticed something really charming: Minnesota! Do you have a personal connection to Minnesota?

Abby Jimenez: I live in Minnesota! I lived in California for most of my life, which is why the first two books start there. As of right now all my future books will be based in beautiful MN.

Writer’s Block: You write “Minnesota” so well, Abby, I feel the need to see it in person! *Bucket list!* Here’s another charming aspect that I noticed in your books: recurring characters! I love when character “cameos” can be found across an author’s work! How do you decide which characters make an appearance in subsequent books?

Abby Jimenez: Sometimes it’s obvious to me that the next character needs to be someone we’ve met in a previous book–but sometimes it’s the readers who make me reintroduce someone. Everyone loved Doug so much, there was no way I couldn’t include his cameo in Yours Truly (Bri’s book!).

Writer’s Block: Doug is awesome! And I am so excited to read Bri’s book! A third commonality between your books I have read: Dogs! Tell us about that connection.  Do dogs play a special role in your life, as they do for your characters?

Abby Jimenez: I absolutely looove dogs. I think dogs are so telling. The kind of dog a character owns and the way the dog responds to that person says a lot about them. A great way to build on a character’s world and personality is by giving them a dog. There will always be a dog in my books!

Writer’s Block: I love dogs, too! I always thought my Sahara, a Brittany Spaniel, should be featured in one of my own books.  She is such a goofball! Maybe I’ll do that. A comment: I ended up adding Part Of Your World to my list of fave summer reads for a number of reasons. One reason is because of your settings. Your Minnesota locales feature lakefront homes, people who genuinely care for one another, and oodles of charm, which make me want to take a roadtrip! Thank you for that summertime inspiration!

Writer’s Block: One thing that I admire about your books is the masterful way you impart the “meet-cute”. I can’t think of another author who does them better! In your latest release, your meet-cute is a car breakdown and rescue. How do you come up with these delightful scenarios?

Abby Jimenez: Each meet-cute has its own inception point. Here’s a fun one: In The Happy Ever After Playlist Sloan meets Jason when his runaway dog dives through her sunroof. I’d seen this cute video of a guy who was dog sitting for a friend. He made an adorable compilation video of all the fun stuff he was doing with the dog; playing in the hose, watching TV, going on walks. I thought, wouldn’t it be so cute if a woman found a man’s lost dog and she made him a video like that? What if this is how they meet? And so the sunroof scene was born!

Writer’s Block: I have read Playlist, and that is one of the all-time best meet-cute scenes I have ever read. You also have a knack for writing swoon-y leading men. In Part Of Your World, Daniel is a small-town jack of all trades. He’s also the town’s mayor, and a baby goat fosterer.  He is as charming as they come…My heart! What is your process for creating these characters?

Abby Jimenez: When I write my men, I start by knowing the woman they’re going to love. Then I write the man she needs. That’s how I do it every time. And I love cinnamon rolls. I love writing men who are emotionally intelligent and vulnerable, who aren’t afraid to show their feelings and be head over heels for the woman they love.

Writer’s Block: That’s fantastic.  I also love that your men have creative sides. At least that has been true with the two books I have read. Jason, in The Happy Ever After Playlist, is a rock star/songwriter (near and dear to my heart!) Now, a serious note:  As delightful as this colliding-worlds story is, there is a thread running through it which highlights domestic abuse, and its various forms. You handled that thread with finesse, and took a stance of empowering women in that situation. I imagine that would be a difficult layer to work into Alexis and Daniel’s story. Can you talk about that aspect of the story?

Abby Jimenez: My best friend is a domestic abuse survivor. Before I knew her, I remember thinking that I couldn’t understand how a woman could stay in a situation like that. And then I met Lindsay and she was this strong, independent woman–who had barely left her first marriage with her life. Hearing her story was very eye opening to me. It was the moment I realized that DV can happen to anyone–young, old, poor, wealthy–and I learned that abuse can be subtle and isolating and it doesn’t always mean bruises and broken bones. I wanted to tell a story about the different kinds of abuse. I wanted to create a roadmap for those in that situation so they could start to see a way out, and I wanted to educate those witnessing it so they could recognize it for what it is.

Writer’s Block: That is brilliant. I hope your work can help others in that situation.  Final question: I can’t wait to read your backlist, but before we end today, tell us: Are there any new projects you are working on? *fingers crossed!*

Abby Jimenez: Yes! My next book comes out in spring of 2023. It’s called Yours Truly and it’s Bri’s book! We get lots of cameos from the characters from Part of Your World and we even get to spend some time in Wakan. I can’t wait!

Writer’s Block: I can’t wait, either, Abby! Thank you so much for your time! Your books have been a joy to read. To close us out, I’d love to share a couple of quotes from Part Of Your World:

― Abby Jimenez, Part of Your World

“Love follows you. It goes where you go.

It doesn’t know about social divides or

distance or common sense. It doesn’t even

stop when the person you love dies.

It does what it wants.”

― Abby Jimenez, Part of Your World 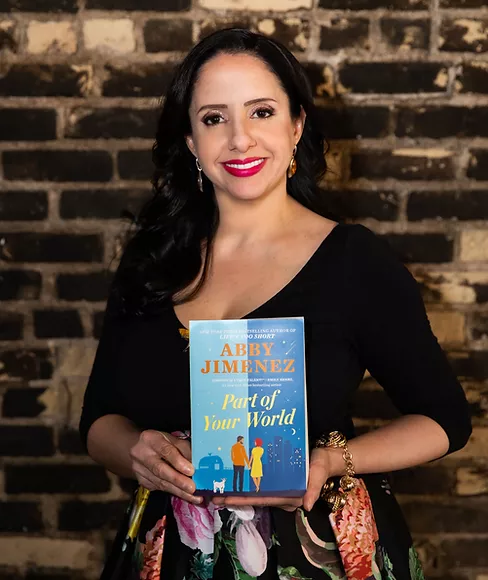 You can purchase A Part Of Your World, here. It’s available in all sorts of formats, including audiobook!

OK, readers…time to chime in! Have you read any of Abby Jimenez’s books? Do you have a favorite Summer read? Let us know in the comments!

Next week, I will be back with Part 3 of my Favorite Summer Reads blog series, featuring author, actor and producer, Robinne Lee.  Join me for that, won’t you? Until then, thank you for dropping by!